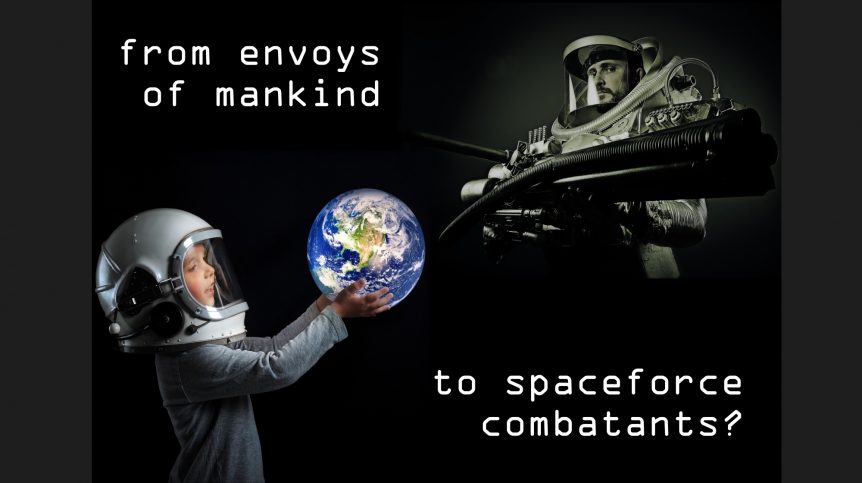 A timely warning on the 50th anniversary of the amazing moon landing:

The Outer Space Treaty (1967) holds up astronauts and cosmonauts as neutral “envoys of mankind” … indeed the Cosmonaut Yuri Gagarin and the amazing Apollo astronauts were feted all over the world for their amazing achievements. Rightly so.

Now we see space faring nations practicing their ASAT capabilities (destroying satellites … the latest being India) and preparing to “peacefully” weaponize space (Earth’s orbit initially) in order to protect assets and project strength. The next step will be national Space Forces, where astronauts and cosmonauts become armed combatants on opposing sides.

The old Outer Space Treaty (OST) tries to hold space for peaceful uses only. Without a good modern update to the loose text, the Treaty will surely fade (it is also seen as outdated because it lends no support for space exploitation/mining). If the OST fades then there is nothing to prevent nuclear weaponization of space … that means nuclear warheads just 350km above our heads. In such a situation we should be very afraid … because of the massive (probably complete) strategic military advantage in making a first anonymous nuclear strike from space…. Game over. Forget the fun concept of Star Wars … nukes in space will be extremely dangerous to all humanity.

We don’t need strike weapons in space. We don’t need astronauts to become armed soldiers. There is a need for international transparency and monitoring of what is being sent up into space. In the near future there probably be some need for an orbital police force, but this should be a “United Nations” entity.

We want to encourage space commerce (mining celestial resources may ultimately save the Earth from over-exploitation … remember, Earth is the BEST planet in the solar system!)… but we also want to preserve opportunity for people of nations yet to become space faring nations. This is why it makes sense to have a responsible space-user group (USA will be absolutely pivotal in this currently small group) to manage space exploitation and integrate with UN if any neutral orbital “police force” is needed.  We dont want a sluggish UN body like the Seabed Authority (hence the UN should, this time, create a responsible user group which will have a pro-commerce outlook).

Join us in the Revolution Resolution to Save The Space Treaty, stop weaponization of Earth’s orbit, protect humanity and Save the Earth!

How do you do that? … either join us here as a genuine Martian Land Claimant or just follow us on Twitter/Facebook: Click Here to @JoinTheMartians

NB: with respect to our Mars Land Claim (in support of our “save the space treaty campaign”), we’ve been back and forth to the the UK High Courts and the UK Government Legal Department in London … all the administrative preparation is complete … now we sit and wait for permission for Judicial Review … stand by!… we know our legal foundations are sound (despite the incredible subject matter) … so be prepared for a legal shockwave from the UK High Court (coming soon!).