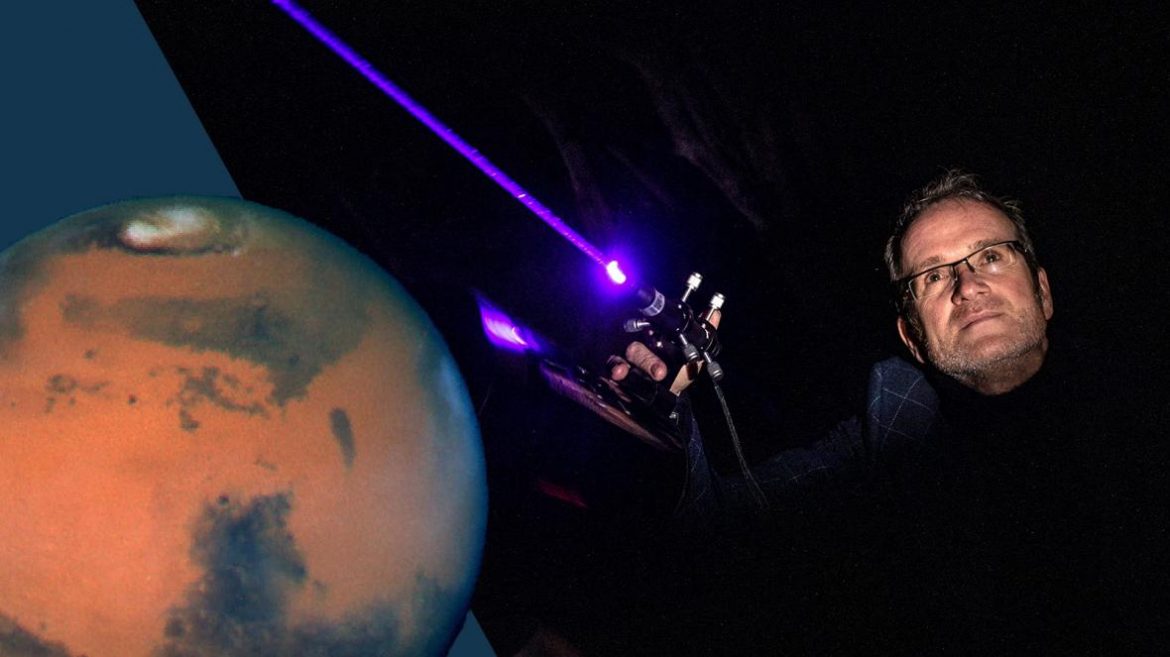 We are not professional astronomers. We enjoy basic astronomy. We have 2 simple scopes in current regular use. Our favoured scope for outdoor astronomy is the Skywatcher Skymax 127 SynScan AZ GOTO Telescope. This is a Maksutov-Cassegrain design of telescope, meaning that although it looks quite a short,stubby telescope tube, it uses an optically folded system which actually gives it a true focal length of 150cm (one and a half meters!). It is thus great for looking at planets, which of course interests us hugely. We have fitted a bespoke bracket to securely fix a powerful laser in alignment with the telescope (in the usual position of a finder-scope). The powered GOTO AZ mount means that once at is aligned to the night sky [we use a 2-star alignment process] it can accurately take you to hundreds of targets and reliably follow them. It can easily follow Mars, keeping the planet firmly in the centre of field of vision. Thus, once we have aligned the telescope with the mounted laser, the laser targeting and following of the planet is seamless and allows more human attention to be devoted to safety issues [checking sky and radar for encroaching aircraft]. We also use a small Dobsonian telescope, mostly for “out-of-the-window” use [Skywatcher Heritage 100P Dobsonian Telescope]. It’ actually very capable for planetary study or use with a laser.

With regard to use of laser, safe deployment using strict standard operating procedures is vital (see our pages on laser safety).

With regard to the choice of lasers, there are 5 important factors for us to consider:

Laser power (it is important to deploy powerful class 4 lasers in order to differentiate our actions from the casual).

Laser beam divergence – this is probably the most important factor in laser specs (must be 2.5mRad or less).

So, we mostly use powerful 1000mW red lasers (JetLasers & Sanwu Lasers: HK/China), 100mW red “Nano” laser and a 100mW green “Evo” laser both made by Wicked Lasers, also of Hong Kong. At higher angles (when Mars is high in the sky) and for media purposes (blue laser is V powerful and more visible), we often use 2 powerful blue lasers made by SkyTech Lasers of Hong Kong [3500 mW and 1000mW, both at wavelength 450nm and divergence < 2.5 mRad]. The performance (and impact on Mars) is better for these lasers that some of the most powerful lasers we have tried (5W and 7W lasers proved to have poor collimation/high divergence). We always deploy red lasers when Mars is low in the night sky (<20deg) in order to minimize the effects of scattering (see: Science Details). The EVO comes with a smartport which allows for some programmable functions, including an EVO App for Android platforms which maintains a Morse Code messaging function. This is a very impressive [although a bit jittery] bit of software applied to a laser… an affordable route into Free Space Optical Communications. See the videos of our laser use in the MEDIA section of this website.

Our calculations (wrt optimal impact upon Mars) have been validated by top professors in astrophysics (see our science section). At times there are up to 10 quadrillion photons per second impacting Mars from our powerful beams. Although this will cause sporadic CO2 release from surface to atmosphere, such a molecular effect is, of course, physically trivial, BUT, as a persistent course of action, such an effort (geo-atmospheric influence) is regarded by legal experts to be more than purely symbolic … largely symbolic, but enough to justify early factual possession of the land on Mars (see our legal section for these independent legal reports).